This month, the Hudson River sloop Clearwater set sail from Croton, New York, bound for Washington, DC, with environmental education and advocacy events planned in DC and along the way. Facing potentially dangerous storms in the Atlantic Ocean, the boat turned around and returned home, though some of the planned events are still going on.

In the midst of climate change and rising sea levels and the recent US withdrawal from the Paris Climate Accords, the scheduled events include a June 29 congressional briefing titled “Protecting America’s Water Amid Growing Threats.” Unfortunately, the education events planned onboard the Clearwater at the docks of a few different maritime museums in Maryland have been hampered by the weather.

Most commenters on Facebook were supportive of the decision to cut the sloop’s trip short, citing the safety of the crew as the top priority, and some people found a metaphor in the story. Despite challenges that might thwart one’s day-to-day plans, the fight for clean, healthy rivers – and the delivery of the “Cargo of Concern” messages from citizens to the federal government – would not be stopped.

Clearwater, and the Clearwater Festival held nearly every June since 1966, were both initiatives of the late folk singer Pete Seeger. The boat serves as what the website calls a “sailing classroom,” and the festival’s mission is, in part, “to support Clearwater’s environmental research, education and advocacy efforts to help preserve and protect the Hudson River and its tributaries, as well as communities in the river valley.”

I attended this celebration of music, environmental education, and environmental advocacy a lifetime ago in 2004. At the time, I was most familiar with and interested in hearing Dar Williams, who arguably gave the crowd chills on a hot day during her performance of “Are You Out There?” I also saw performances by the Nields, Sol y Canto, and Catie Curtis. It was a picnic-and-chat-and-walk-around-with-your-friends event, rather than a sit-still-and-listen-attentively-to-the-music event, and I can’t say I remember much about the musical acts.

While looking back on this event and reading up on Clearwater’s current activities, however, I have been revisiting the music of the artists I heard that day. And I have gotten a bit obsessed with the Nields. My playlist these days is all Nields, all the time. I mean, they have a song about Pluto no longer being a planet. 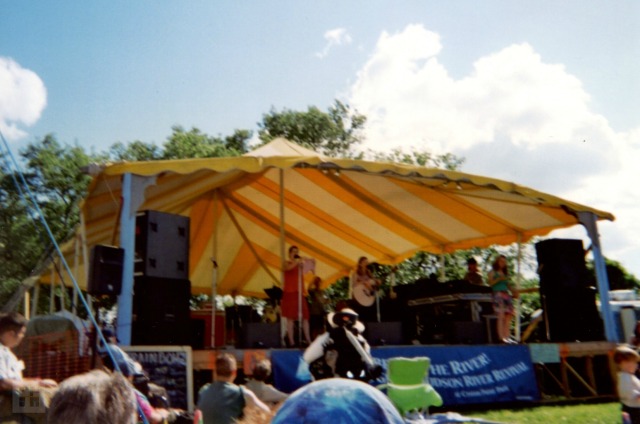 The Nields perform at the Clearwater Festival in 2004 at Croton Point Park in New York.

Paralegal with Master of Arts in Teaching in Museum Education, frequent museum visitor, based in Washington, DC. I care about what museums can do, both in terms of public offerings and internal practices, to make the world a better place. I blog about museum education ("informed"), the social work of museums ("humane"), and visitor experience ("citizenry").
View all posts by Laura →
This entry was posted in Museum Visits (Other) and tagged Clearwater, Clearwater Festival, Croton Point Park, NY, parks, Resistance. Bookmark the permalink.