Most of spring 2010 was spent at the National Postal Museum (NPM). I interned there four days a week, working on a unit called Heroes on Stamps to be used in after-school programs (and falling in love with the museum’s mascot, Owney the dog). But I did not spend 32 hours a week sitting in the same chair, working on the same exact thing. My supervisor encouraged the employees and interns to go to other museums: to visit, to help out on collaboration projects, to hear experts speak.  One such speaker was David Morris, who gave a talk at the Smithsonian’s Museum Support Center about airplane conservation. Morris described his work restoring an entire aircraft; while spending years determining the correct shade of paint for a plane is not my own interest or specialty in the museum world, his passion for such conservation was inspiring. I saw multiple speakers at events at the National Museum of the American Indian and the Ripley Center, watched museum theater at the Greensboro Lunch Counter at the National Museum of American History, and worked at a public program at the National Portrait Gallery. I was happiest of all to hear the lofty museum education luminary George Hein speak at a lunchtime lecture in a Smithsonian conference room. 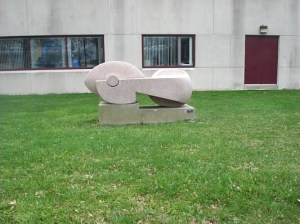 I hosted two of my classmates at my own NPM field placement, and I spent a day each visiting two classmates’ internships. One of these visits was to the United States Botanic Garden (USBG), which I had explored many times before. While previously working in an office at the Capitol, I had often spent part of my lunch break at USBG, photographing flowers and recharging. Now, for the first time, I was getting a behind-the-scenes tour of the facility. The Walters Art Museum, on the other hand, was a place where I had never been before. My classmate took me through the many galleries, including a scientific study on how viewers’ brains respond to sculpture. I followed a tour, saw part of an art class, and heard a curator speak, in addition to wandering the halls of art from around the world. There was quite a bit of art to see here, but my host also found time to take me behind the scenes and tell me all about her own project.

Dome at the Walters Art Museum

The internship coincided with a weekly seminar for us museum education students, and in addition, I took one elective. My elective, Ethics and Cultural Property, was a fascinating look at the ethical quandaries associated with collecting, interpreting, and (possibly) repatriating objects. I wrote a paper on gender-based rules that some Native American cultures have for viewing or handling objects, and I was lucky enough to visit the National Museum of the American Indian’s Cultural Resources Center. An expert gave a tour of the storage and conservation facilities, in which great care is given to ensure that artifacts are treated according to the traditions from which they came and, in certain cases, are repatriated. Indeed, some objects were only to be touched by men, and they were wrapped in such a way that female workers could access them without touching the objects directly.

At the National Museum of the American Indian’s Cultural Resources Center in Suitland, MD, a label indicates an object should only be touched by males.

The third semester of the Museum Education Program is often students’ favorite (it was mine) because of the amount of time spent actually interning in the field, at a site that is a good fit for each individual student. My time at NPM was among the most challenging, invigorating, productive, and intellectually stimulating experiences I have had in the museum field, and I enjoyed my internship there as well as the many other museum excursions that took place in the spring semester of 2010.