From the museum’s website: Using photographs and documents, the museum helps visitors understand the African American’s heroic and largely unknown role in maintianing the Union and securing the blessing of liberty for all Americans.

Inside, the museum packs a lot of information into one floor of exhibit space. At times, I doubled back on my path through the exhibits, not sure where to go next, but this confusion is a byproduct of such comprehensive exhibits and maximizing the use of the square footage.

On the partitions are text, quotes, and images, with objects displayed nearby. Quotations seem to be the stars of the museum, and I appreciated the consistent format throughout the museum that made it easy to see where the quotes would be, and where to find explanations and captions, on each panel.

The quotes include statements indicating a tension common to movements for social change: how much to push for at once, and how hard to push. Without conflating moments in history, the parallels exist nonetheless. (Did the Founding Fathers mean for slavery to be naturally “phased out”? Which approach works better, that of Booker T. Washington or that of W.E.B Du Bois? Could civil rights be achieved through non-violent means alone?) The difference is less in the end goal than in the method of getting there.

In the decades preceding the Civil War, black writers took different approaches against slavery, as shown in quotes in the museum:

Frederick Douglass proclaimed, "It is not light that we need, but fire," advocating a more active fight for abolition

The museum shows the role of African Americans leading up to the Civil War as well as during the Civil War, on the battlefield. Though the right to fight at all was a struggle, once granted, it was taken up with diligence.

One of several quotes praising the military contributions of African Americans

As the exhibits continue, the post-Civil War legacy is also explored. Visitors can read about the Double V campaign during World War II, see a button from the March on Washington, and pose with a cutout of Barack Obama.

Once outside, I think I was the only person paying attention to the memorial itself on this rainiest of days. As commuters with their umbrellas and briefcases rushed down into the Metro at 6:15 pm, I stood in the rain taking pictures. 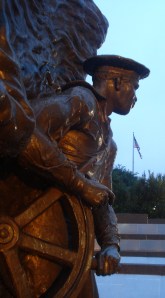 Paralegal with Master of Arts in Teaching in Museum Education, frequent museum visitor, based in Washington, DC. I care about what museums can do, both in terms of public offerings and internal practices, to make the world a better place. I blog about museum education ("informed"), the social work of museums ("humane"), and visitor experience ("citizenry").
View all posts by Laura →
This entry was posted in Photos, Weekly Museum Visits Part II and tagged African American Civil War Memorial and Museum, DC, museum, weekly museum visit. Bookmark the permalink.